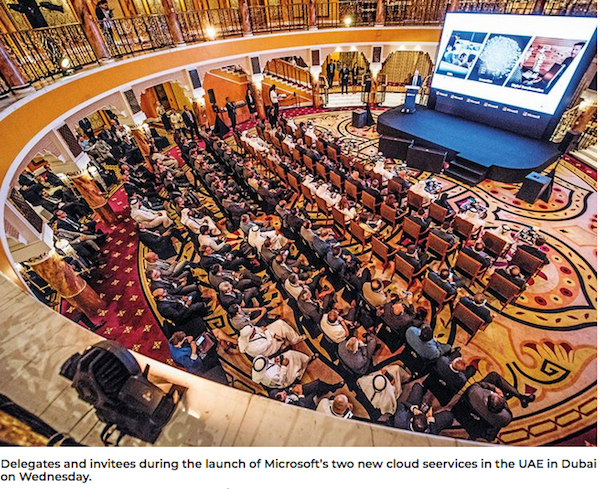 Dubai: Microsoft on Wednesday will launch two regional cloud services from its new data centers in Dubai and Abu Dhabi, according to Sayed Hashish, general manager for Microsoft Gulf. The data centers were announced last year.

Microsoft joins a growing number of big tech companies moving data centers into the region. Amazon Web Services has a data center in Bahrain; Chinese e-commerce giant Alibaba Group has one in Dubai; and Oracle has a center in Abu Dhabi.

The launch is part of the company’s expansion, announced last year, of cloud services around the global. The company is also launching data centers in Switzerland, France, and Germany.

“It made sense for us to base our first Middle East data centers in the UAE to capitalize on the position the country has achieved,” Hashish told Gulf News in an interview. “We’ve had a lot of demand from customers, whether it’s government or the commercial sector, for data centers that are close to them.”

Hashish said that having the services run from local data centers allows companies to meet regulatory requirements that data be stored in the country as well as allowing Microsoft to offer its services at lower latencies (connection speed). He added that the data center will not serve just the UAE but offer global services.

Hashish said the lower latency issues will be increasingly important as demand for cloud services in the region grows.

“With the expected increase and adoption of technology that we’re seeing, and with the increased reliance on cloud versus on-premise, this is an area that becomes very important for users. If you’re my customer and you’re asking me a question and it take three seconds for the service to respond, that’s not acceptable.”

Although Microsoft confirmed that it was in talks with the UAE’s Telecommunications Regulatory Authority last year to lift the ban on Skype, a voice-over-internet-protocal service that requires a UAE telecom license, Microsoft declined to comment further, saying it has no update on the status of the service at this time.

Hashish said that Microsoft expects a lot of demand for Azure, “especially considering the economic pressure that the region has been under. It makes a lot of sense for people to stop investing in hardware and give that part to companies like Microsoft.”

He said he is also seeing a lot of demand for cloud service due to regional concerns about security.

“Security is one area that every customer is keen on,” he said. “The interesting phenomenon that we’ve seen is that four or five years ago, when we were talking about cloud, a lot of the customers were reluctant to go to the cloud because of their fears about security. Today, a lot of the companies want to go to the cloud because of security, because they realize that the need for cyber security – it’s a global need.”

Microsoft Dynamics 365, which offers enterprise resource planning (ERP) and customer relationship management applications (CRM), will also be launched in the UAE by the end of 2019.

Hashish said that normally Microsoft rolls out only one cloud service at a time, but Wednesday’s launch “is a little bit unusual” since two services – Azure and Office – will be rolling out at the same time. Prices for these services will be announced on Wednesday.